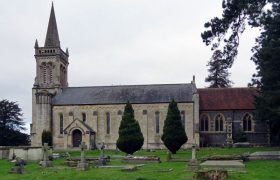 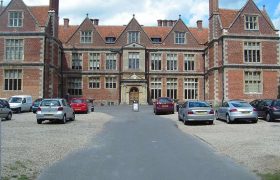 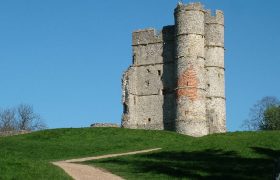 Shaw-cum-Donnington is located just to the north of Newbury. It not only has a rich history, today it has beautiful countryside, renowned hotels, pubs and golf courses and is the home of Vodafone. Find out more by clicking on the links below. 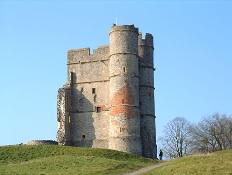 The historic parish of Shaw-cum-Donnington lies to the north of Newbury town centre and is easily accessible from junction 13 of the M4, or the A4 Bath Road in Newbury.  The southern boundary of the parish is delineated by the River Lambourn, a chalk stream which meanders several miles on its way from Lambourn.  The north of the parish stops just short of the Fox and Hounds pub on the Oxford Road, and Fisher’s Farm on the B4009 to Hermitage.  To the east, the parish includes Long Lane and Shaw Hill, and to the west goes as far as Snelsmore Common.  Currently, there are around 600 households in the parish.

The parish is perhaps best known for Donnington Castle, the area behind the site of the 2nd Battle of Newbury in 1644.  Entry to the Castle is free and it is open all year round.  To get to the Castle you have to pass through the charming village of Donnington, which contains many charming listed buildings.  Another place of historic interest is Shaw House which has recently undergone extensive renovations and is now used for civil weddings.

Shaw-cum-Donnington is also home to Vodafone’s HQ, which can be accessed on foot along Love Lane or by car from the A339.  Vodafone’s employees can often be found involved in projects in the parish, including litter picking in Shaw Park and clearing the River Lambourn.

Keen golfers may want to test their handicap at one of the two golf clubs in the parish – Donnington Valley or Donnington Grove. The former also has a health club and spa, ideal for a bit of pampering! For those thirsty after exploring Donnington Castle or the many local footpaths, there are many pubs in or on the edges of the parish – you can find these on the website here.

Whatever your interests there will be something for everyone in Shaw-cum-Donnington!

For most of their history it was Donnington that was the more important settlement, but it was hit hard by two major events in English history – the dissolution of the monasteries and the Civil War.

During the same period Shaw flourished and became the location of the only church in the combined parish.

The Mediaeval manor of Essages passed through many hands as it gradually changed its name to Shaw. The most important change of onwership came in 1554 when Thomas Dolman of Newbury purchased the manor. The following year he bought another local manor at Colthrop just east of Thatcham.

Dolman was a very wealthy clothier whose family had made an immense fortune in a couple of generations. His father was foreman for the famous Jack of Newbury who made an even larger fortune in the cloth trade.

By 1580 the cloth trade was in decline as wars on the continent had disrupted the main export market. Jack of Newbury (John Winchcombe) had already made the move from trader to landed gentry when he bought the manors of Bucklebury, Thatcham and East Lockinge in the 1530s. Many years later Donnington was to be added to the family’s holdings.

Thomas’ son, another Thomas, decided that he needed a house that would show off his wealth and status, the result was the magificent Shaw House, completed in 1581. However, the new residence was not viewed with universal approval as he was thought by some to be abandoning his cloth workers … as the following rhyme suggests:

Lord have mercy upon us, miserable sinners,
Thomas Dolman has built a new house
And has turned away all his spinners.

Most locals will remember the house best as the home of Shaw House School where many of them received their secondary education. However, the old building deteriorated in condition and concerns were raised about its safety. In 198x the school moved out into new premises alongside (now part of Trinity School). 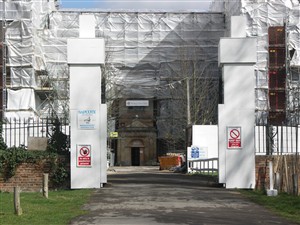 The house then stood empty and unused for many years; panelling was stripped of the walls to see if they were in as bad condition as anticipated – they weren’t. The picture taken in 2006 shows the house shrouded in plastic as it underwent a multi-miilion pound refit.

Towards the end of 2006 the wrappings were taken off and Shaw House began a new chapter in its life. West Berkshire Council who inherited the abandoned building from Berkshire County Council in 1995 are using the house as a venue for meetings and seminars and as the offices of the West Berkshire Education Centre.

It also houses the local Registrar of Births, Marriages and Deaths and is a superb venue for civil marriages and wedding receptions.

The schedule of listed buildings maintained nationally by English Heritage is an attempt to protect our nation’s rich architectural heritage. A listing in the schedule demonstrates that the building or object has been designated as being of particular merit architecturally or historically. Shaw and Donnington are littered (if that is the term) with historically important sites many of which are recognised by being ‘listed’.

All of the parish’s major historical buildings are listed, notably Donnington Castle, Shaw House, St Mary’s Church and the Donnington Hospital Almshouses. In total there are 28 listings in the parish.

As well as these listings there is further protection for a portion of southern Donnington which is marked as of special interest as part of the site of the Second Battle of Newbury in 1644.

The Siege of Donnington Castle

All that remains of Donnington Castle is the mediaeval gatehouse, the remainder was lost during almost three years of conflict as Parlimentary forces attempted to dislodge the Royalist garrison commanded by Col John Boys.

The Second Battle of Newbury

In October 1644 one of the most important battles of the Civil War took place across Shaw and Donnington and the neighbouring parishs of Speen, Newbury and Thatcham.

The Parliamentary forces massively outnumbered the Royalists and were in a position to attack in force from both sides of the Royalist positions. At that time defeat for the King could well have ended the war. However, the Royalist defences held out against a poorly coordinated attack and neither side could claim a victory.

As a result of the battle was the Parliamentarians had a huge row about who was to blame for their failure to defeat Charles. The two main protagonists leading the arguments were the Earl of Manchester, who led the eastern forces in the battle and Oliver Cromwell who commanded a cavalry regiment among Sir WIlliam Waller’s forces attacking from the west. The result was the formation of the New Model Army which eventually brought Cromwell to power.

See our Picture galleries »
Find us »

You can find out more about which cookies we are using or switch them off in settings.

This website uses cookies so that we can provide you with the best user experience possible. Cookie information is stored in your browser and performs functions such as recognising you when you return to our website and helping our team to understand which sections of the website you find most interesting and useful.

Strictly Necessary Cookie should be enabled at all times so that we can save your preferences for cookie settings.

If you disable this cookie, we will not be able to save your preferences. This means that every time you visit this website you will need to enable or disable cookies again.