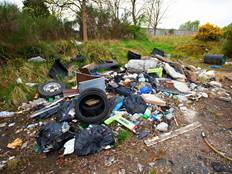 Fly tipping is the illegal disposal of waste, as opposed to using an alternative option such as kerbside collection

or using of an authorised rubbish recycling centre. Waste can include liquid or solids on either land or in water. This differs from littering which is the incorrect disposal of one-off items such as a plastic bottle or a crisp packet.

Fly tipping can include the disposal of large household items or bags of waste, which is generally deposited on public land or road sides. Common items include mattresses, white goods, furniture, tyres or black bin bags containing mixed household waste.  It can also be larger quantities of waste generated through trade, including hazardous waste such as oil or asbestos.

Fly tipping most commonly occurs on areas such as country roads, private land, derelict land and on the outskirts of urban areas. This is a criminal activity that is not only unsightly but also harmful to the environment and wildlife.

Local Authorities are responsible for investigation, clearing and taking appropriate action in regards to small scale fly tipping on public land.  The Environmental Agency is responsible for dealing with incidences in which there is more than a lorry load of waste, if the waste is hazardous, or if the incidence is linked to organised gangs.

“In 2018/19, local authorities in England dealt with over 1 million fly-tipping incidents”

There are many ways in which you can support your community to reduce the incidences of fly tipping.